Master Cheng Yen calls it “the most rewarding thing in life”

Filial piety was the topic of the December 4 humanities class attended by about 500 Tzu Chi scholars from the elementary, high school, and college levels at the Jing Si Hall of the Buddhist Tzu Chi Campus (BTCC) in Sta. Mesa, Manila.

Accompanied by their parents and guardians, participants included 14 new scholars from Pampanga, who each received their scholarship certificate, then were oriented separately on Tzu Chi’s scholarship program. Scholars from Palo, Bicol, Zamboanga, and Iloilo also attended via livestream in their respective provinces.

This marked the first humanities class for the 21 new Tzu Chi scholars from Iloilo. Watching in real time from Hotel Del Rio, courtesy of Mr. Alfonso Tan, the scholars also each received a bag of snacks after the class, and later claimed their rice and grocery allowances.

Dharma Master Cheng Yen, who wrote the book “The First Lesson to a Happy Life: The Essence of Filial Piety,” considers showing utmost respect to our parents “the foundation of human decency” and “the most rewarding thing in life. Two things should never wait,” she once said, “doing good deeds and being good to our parents.”

Such are the virtues of Shan, the central character of the animated video presented by Master Cheng Yen. A doting son to his elderly parents, he was out fetching water when he was struck by the arrow of the King who was hunting for deer. “If I die, my parents will die!” he cried. A remorseful King fetched Shan’s parents, who wept for their son and prayed that he be brought back to life. To their delight, he came to, a fitting reward for a son who always put his parents first.

From Dr. Louie Tan, cardiologist at Chinese General Hospital and Medical Center and the day’s guest speaker, students learned that filial piety is both natural and easy—even if our parents make it difficult to love and respect them at times. Tasked to look after his father, a popular and well-liked doctor who grew cranky and bitter when he became ill, Dr. Tan rose above his dad’s dark moods to personally attend to his health till his final breath.

The humanities class ended with each scholar receiving two sacks of 10 kg rice, a bag of assorted grocery items, and a packed light lunch. 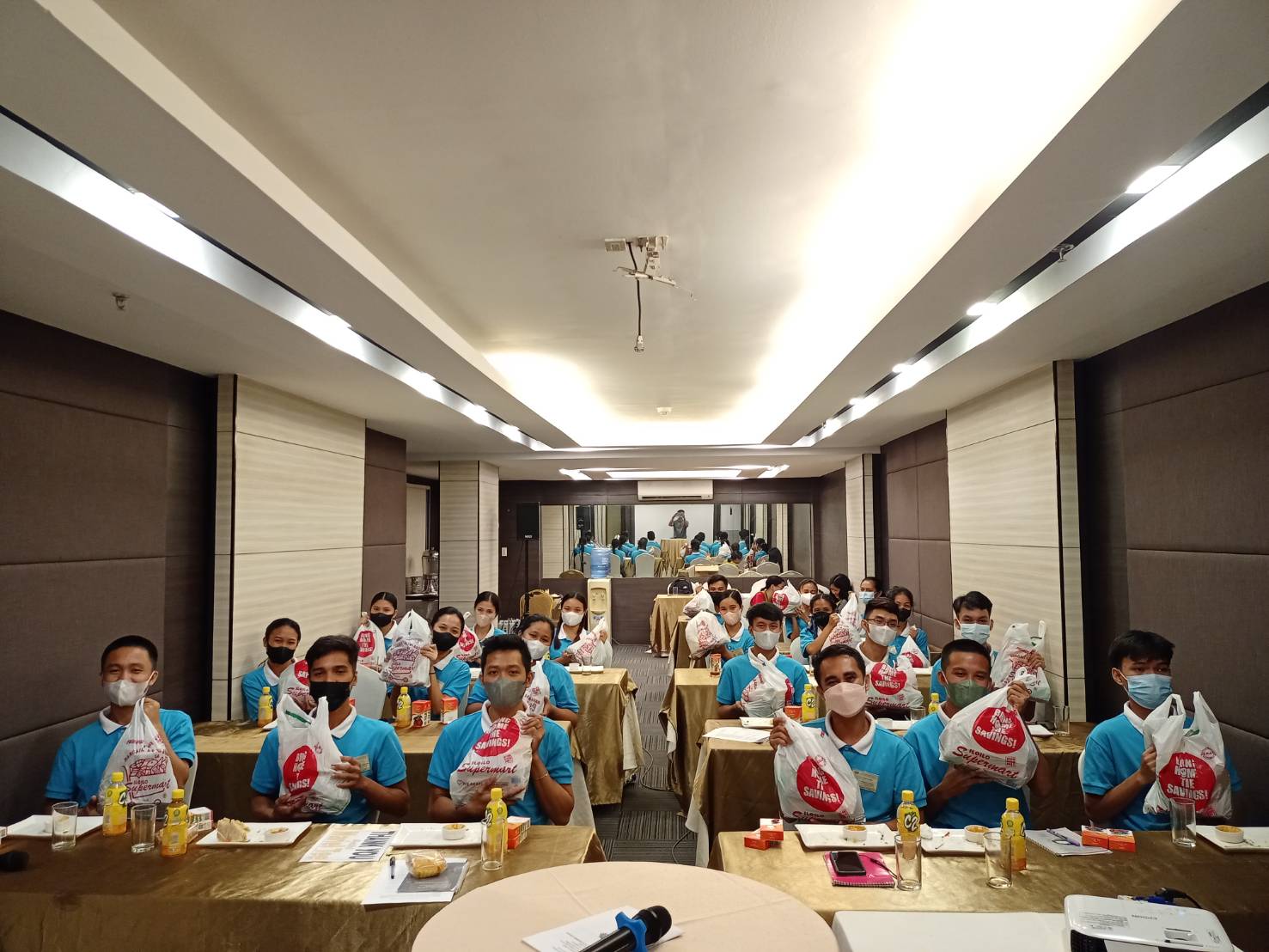 Attending the humanities class via livestream from Hotel del Rio, the 21 Iloilo scholars went home with a snack bag each. 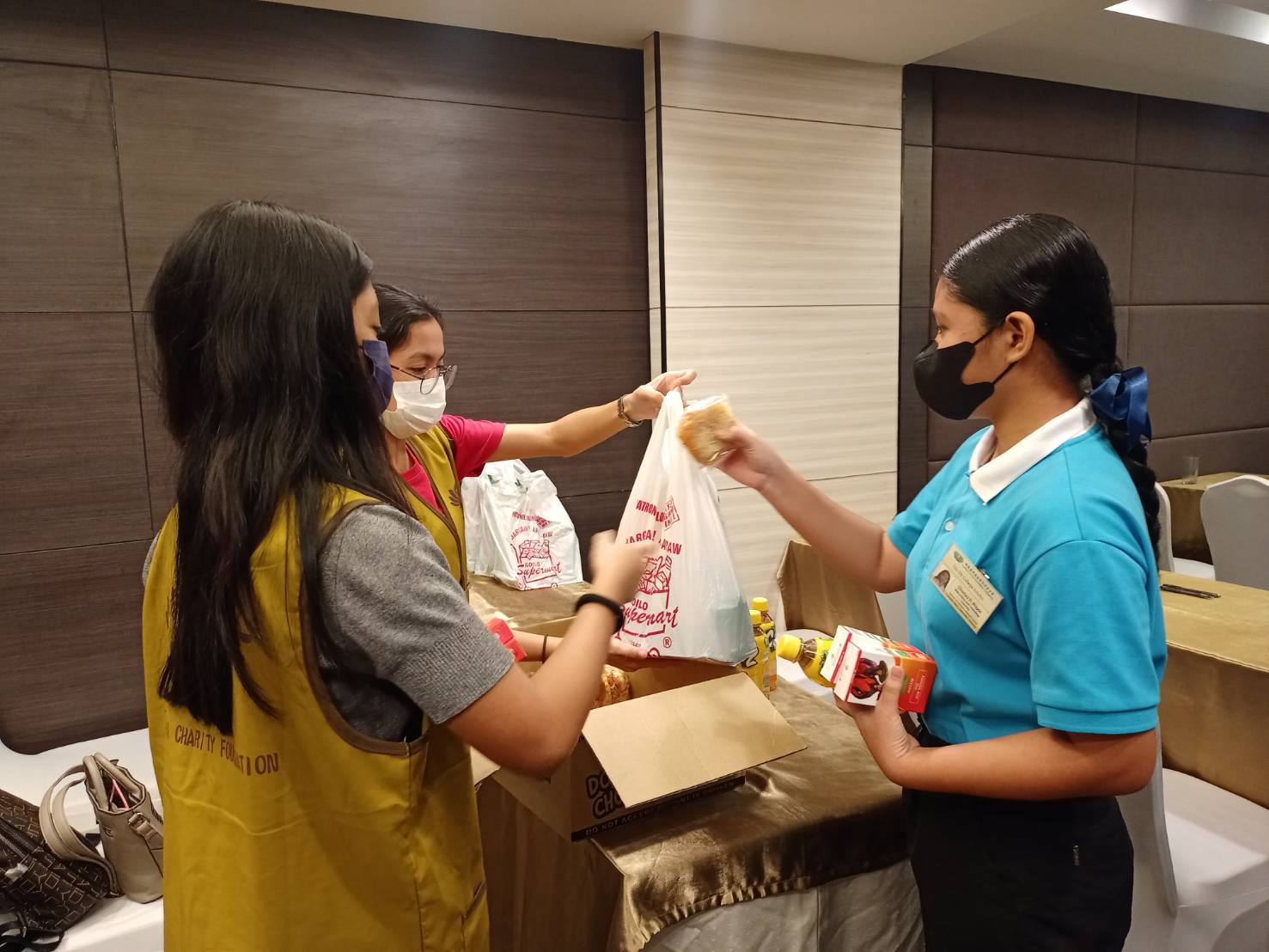 Tzu Chi volunteers give an Iloilo scholar a bag of snacks. 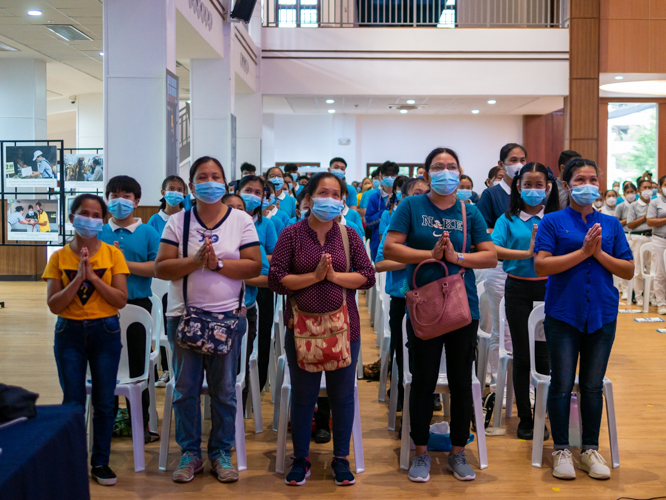 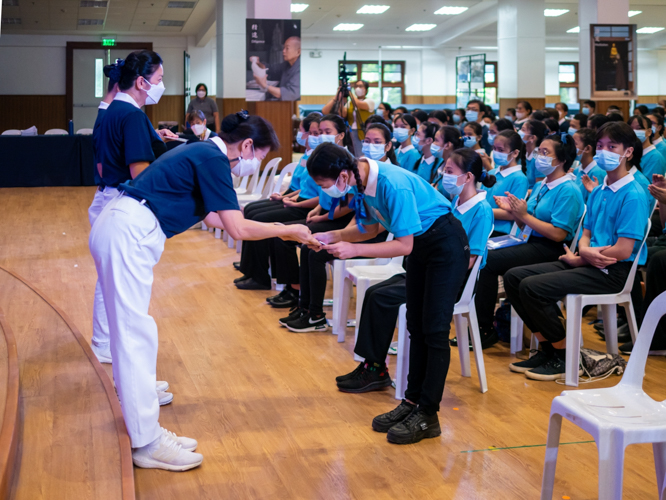 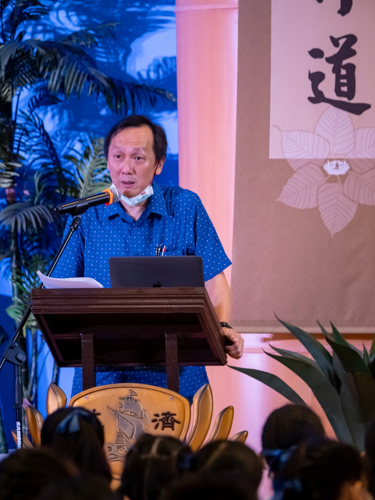 Chinese General Hospital and Medical Center cardiologist Louie Tan was the guest speaker of the humanities class. He discussed filial piety in his experience looking after his father, a doctor who deteriorated from illness. 【Photo by Daniel Lazar】 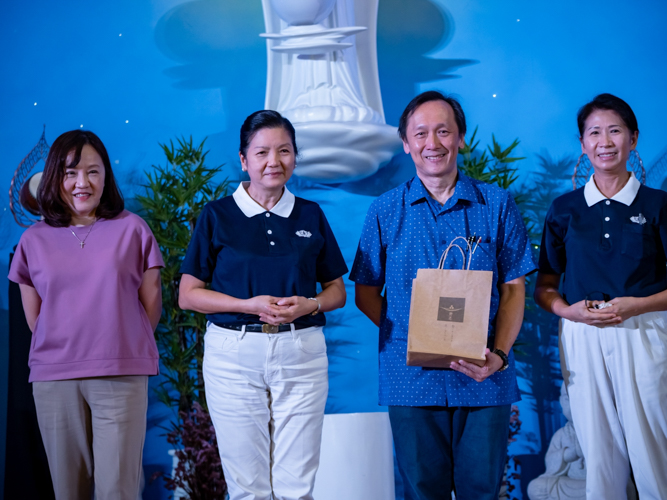 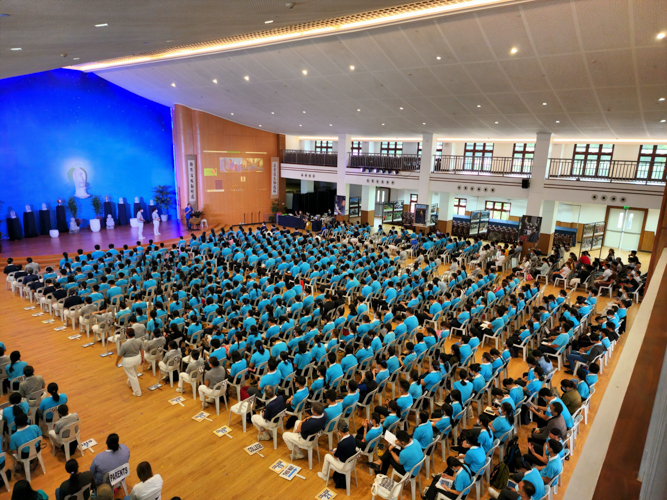 About 500 scholars from the elementary, high school, and college levels attended the December 4 humanities class held at the Jing Si Hall. 【Photo by Daniel Lazar】 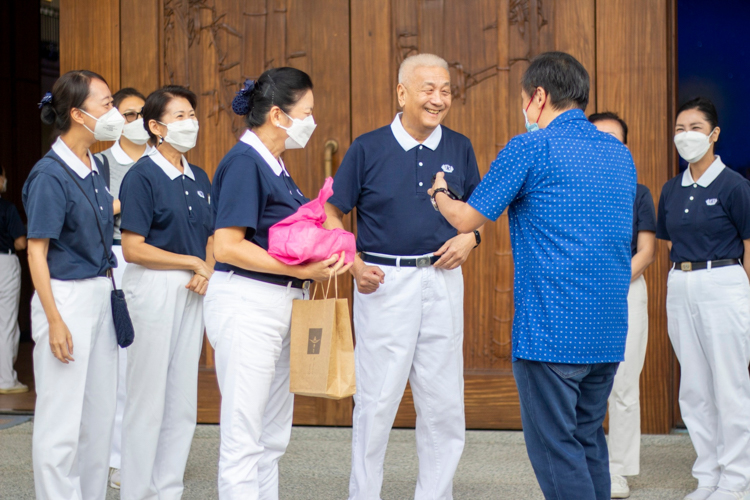 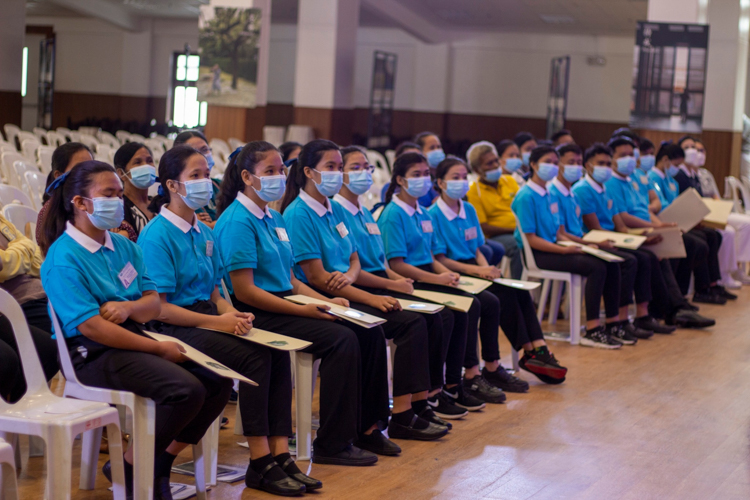 Pampanga scholars listen during the orientation. 【Photo by Matt Serrano】 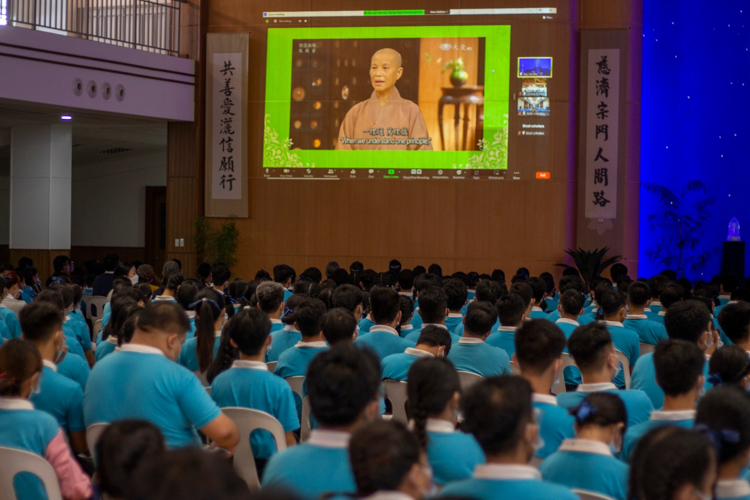 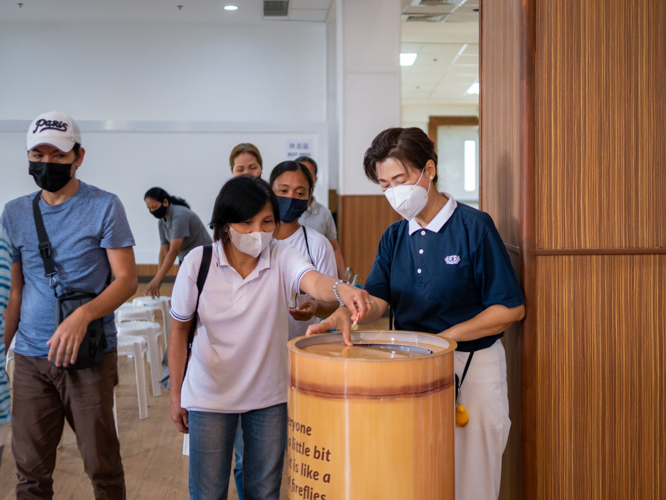 A mother places her pledge in a large collection container. 【Photo by Matt Serrano】 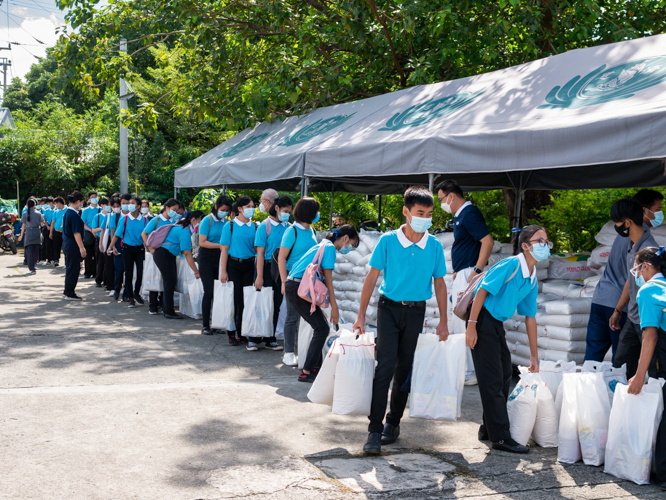 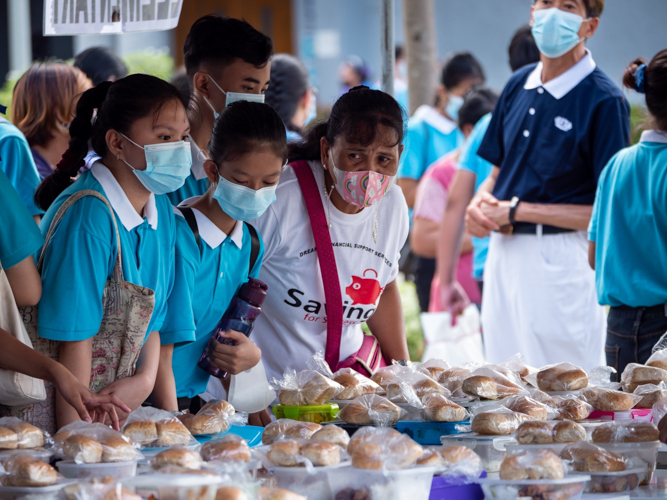 Light packed lunches were also distributed after the humanities class.【Photo by Daniel Lazar】
Go Back