Buddha Bathing Ceremony, according to first-timers

The solemn event is said to cleanse impurities and bestow limitless blessings to all.

Rosario Amacio and Bernie Bernardo have never witnessed a Buddha Bathing Ceremony before. So, when Tzu Chi volunteers staged one during the triple celebration of Buddha Day, Tzu Chi Day, and Mother’s Day last May 8 at the grounds of the Buddhist Tzu Chi Campus (BTCC) in Sta. Mesa, Manila, the couple behind the denim upholstery of Tzu Chi Café’s chairs was absolutely mesmerized.

Walking in unison with quiet dignity and restraint, Tzu Chi volunteers took turns standing before tables laden with crystal Buddhas, fresh flowers, and vibrant greens. With palms together in prayer, they bowed reverently before the Buddha and touched the bowl of water, a gesture that symbolizes touching the foot of Buddha. Then they bowed again, this time picking a flower from a bowl to signify their acceptance of fragrance and blessings.

“You feel the sincerity and the solemnity. You also feel like you’re part of the activity even if you’re just watching from the sidelines,” says Amacio. “Maybe next year, I’ll join!”

One of 166 Tzu Chi scholars to participate in the traditional ritual, Caroline Dordas was happy to experience her first Buddha Bathing Ceremony with fellow scholars. “I think it’s important to be open-minded about other religions,” says the practicing Catholic. “From other religions, we gain ethical principles that can be applied to our own lives.”

A Tzu Chi scholar for the past two years, Dordas has been doing exactly that. In addition to focusing on her subjects in Bachelor of Science-Master of Arts in Psychology and Counseling at the Philippine Normal University, she attends Tzu Chi’s Humanity Class every Sunday via Zoom.

Through these virtual classes, she learned to appreciate and incorporate many of Dharma Master Cheng Yen’s teachings in daily living. “My favorites are vegetarianism and filial piety,” she says.

Her mother Minerva has seen the change in her fifth of seven children. “She’s always been a good daughter,” says the homemaker. “But she became even better.”

Said to cleanse us of our impurities, the annual Buddha Bathing Ceremony also bestows limitless blessings upon all.

“If I could ask Buddha for anything, I’d ask for the pandemic to end because I want to see my friends and attend face-to-face classes,” says Dordas. “Also, to guide my family and the world.”

For Amacio and Bernardo, good health, more work opportunities with Tzu Chi, and a competent leader following the recent national elections are what they would ask Buddha.

Adds Amacio, “I also pray to Buddha to give Master Cheng Yen and all those who make up the Tzu Chi Foundation more years, more good health.” 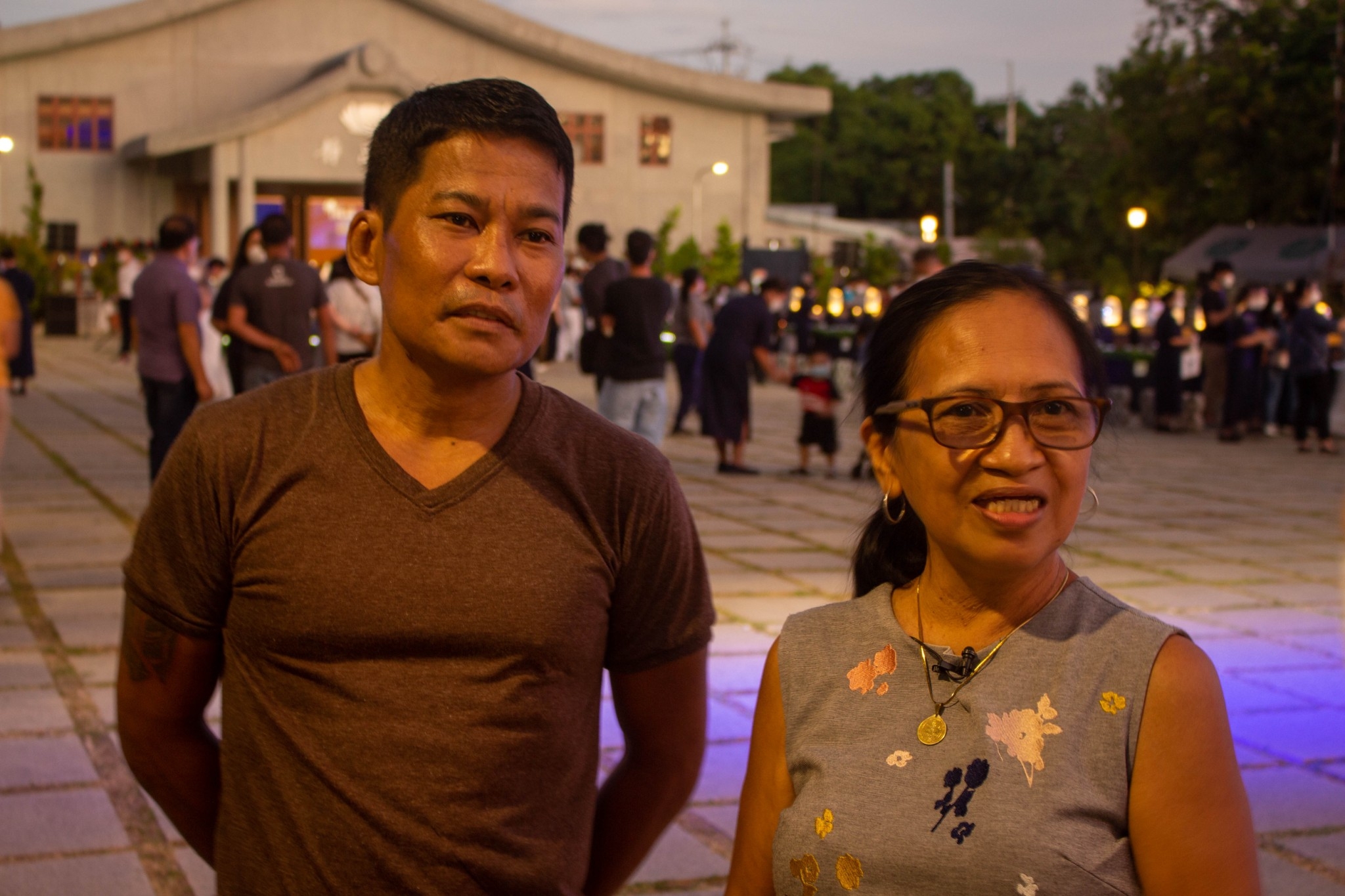 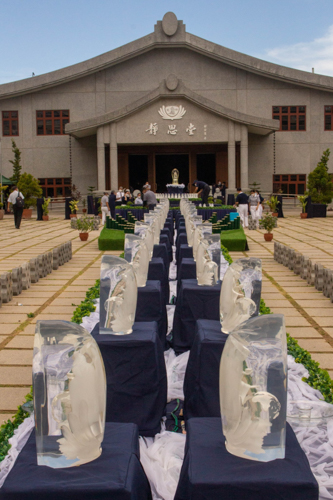 Volunteers lent their crystal Buddhas for the Buddha Bathing Ceremony Nearly 100 of them in various sizes were used for the solemn ritual. 【Photo by Mavi Saldonido】 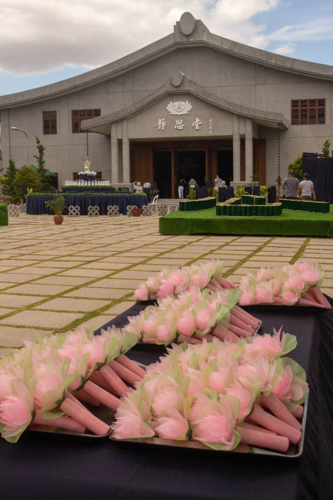 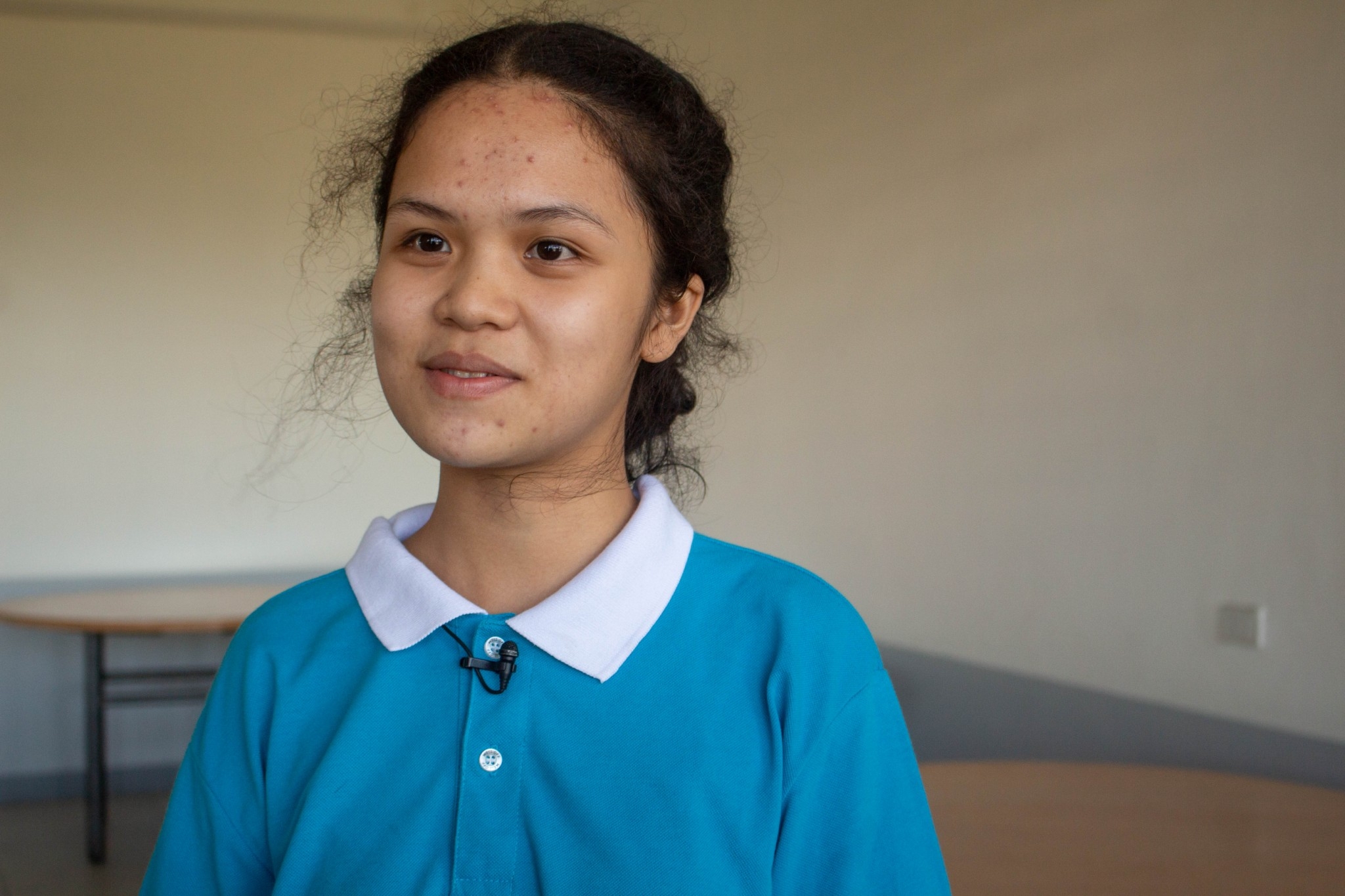 “I think it’s important to be open-minded about other religions,” says Tzu Chi scholar Caroline Dordas, who participated in the Buddha Bathing Ceremony for the first time. “From other religions, we gain ethical principles that can be applied to our own lives.” 【Photo by Mavi Saldonido】 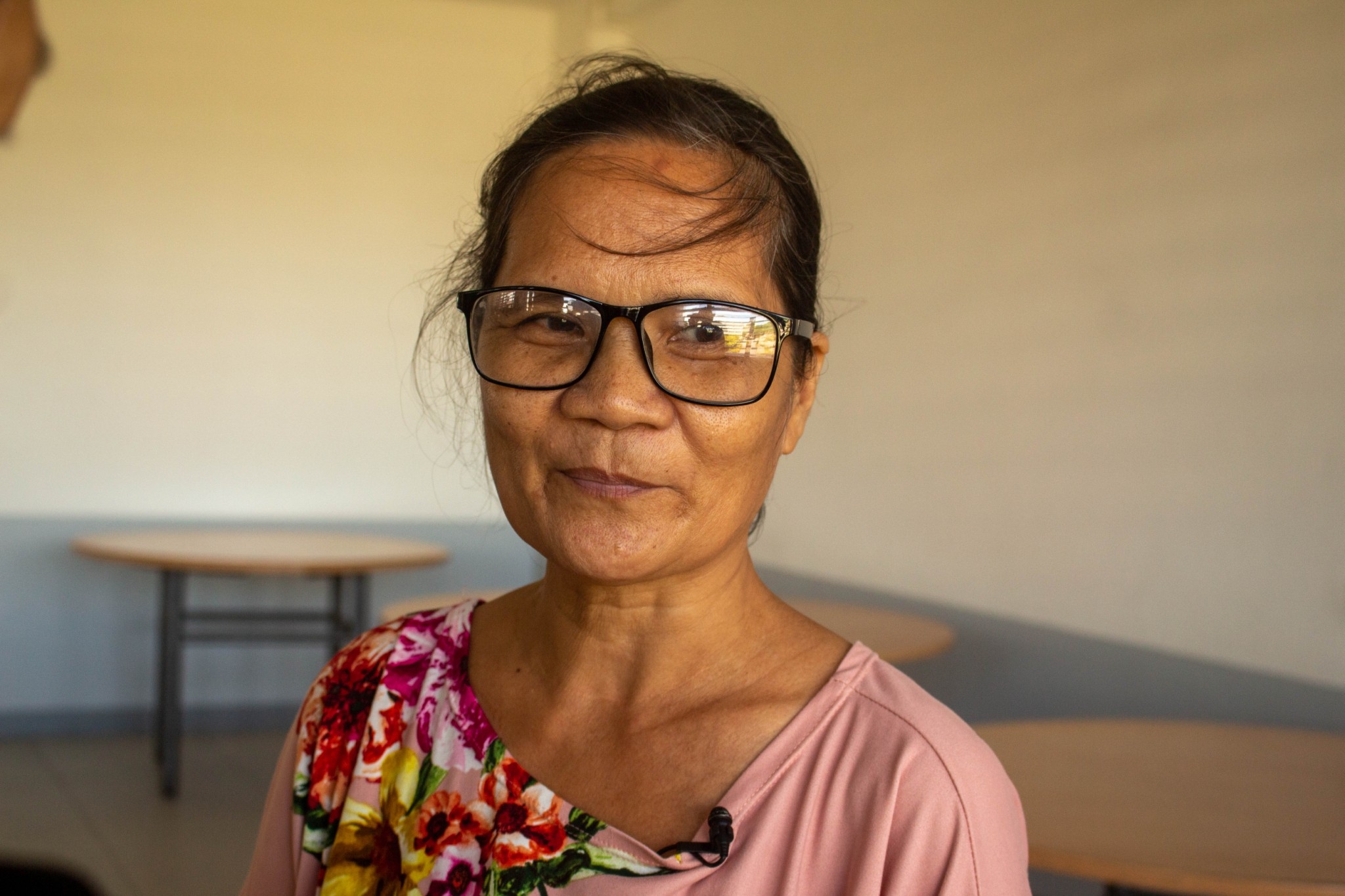 Homemaker Minerva Dordas described daughter Caroline as kind and helpful to her parents and six siblings. 【Photo by Mavi Saldonido】 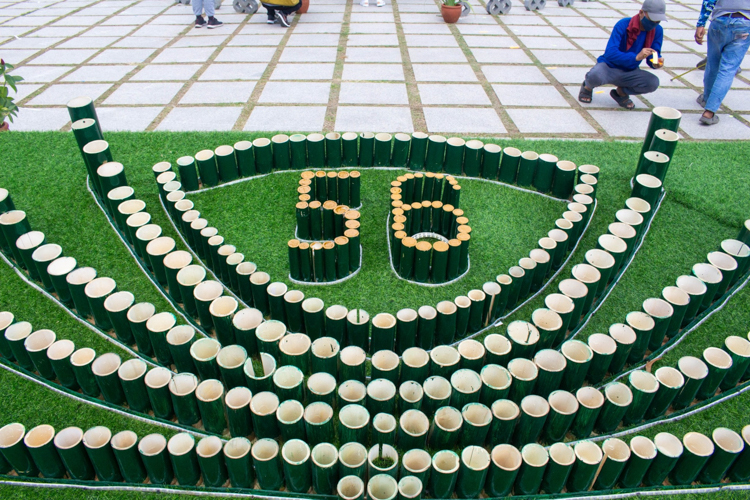 Painted green, bamboo stalks were organized to form the number 56, in honor of Tzu Chi’s 56 years in existence worldwide. 【Photo by Mavi Saldonido】 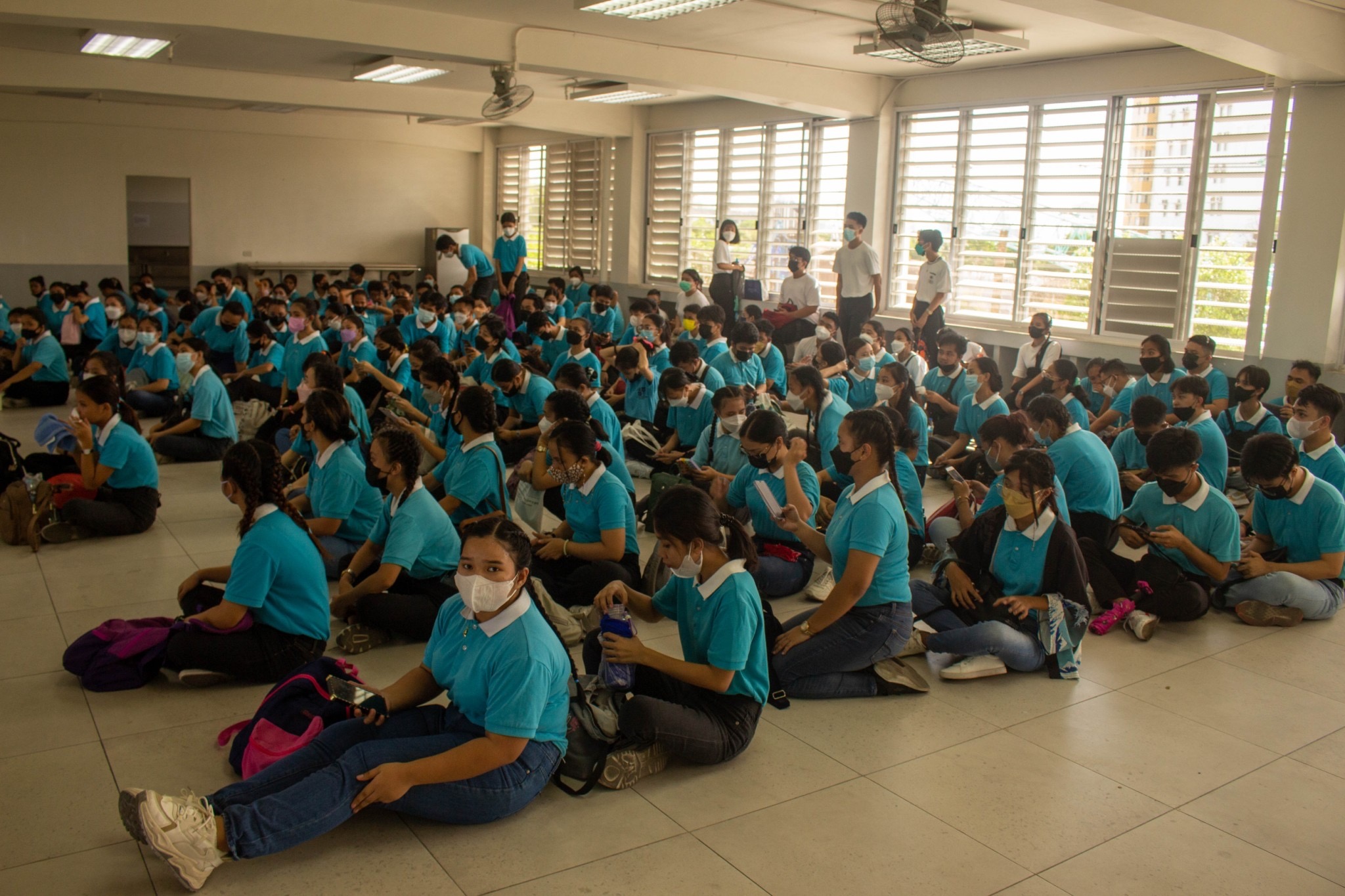 A total of 166 Tzu Chi scholars participated in the Buddha Bathing Ceremony. 【Photo by Mavi Saldonido】 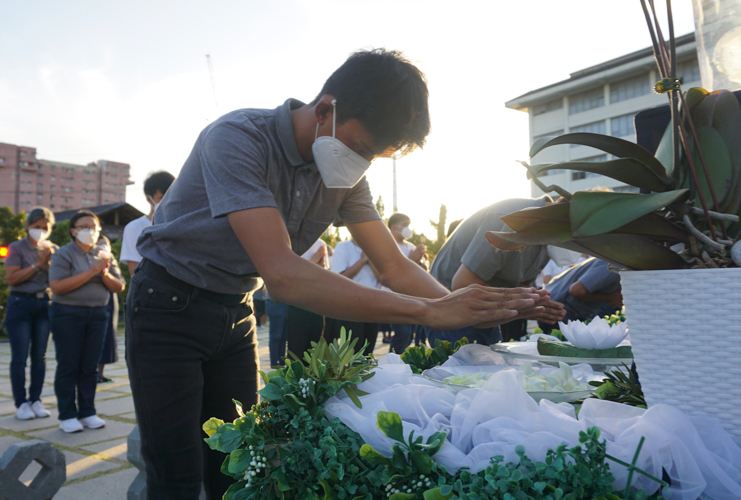 A volunteer bows before a crystal Buddha and touches a bowl of water. The gesture is akin to touching the feet of Buddha. 【Photo by Jenie Sy Lao】 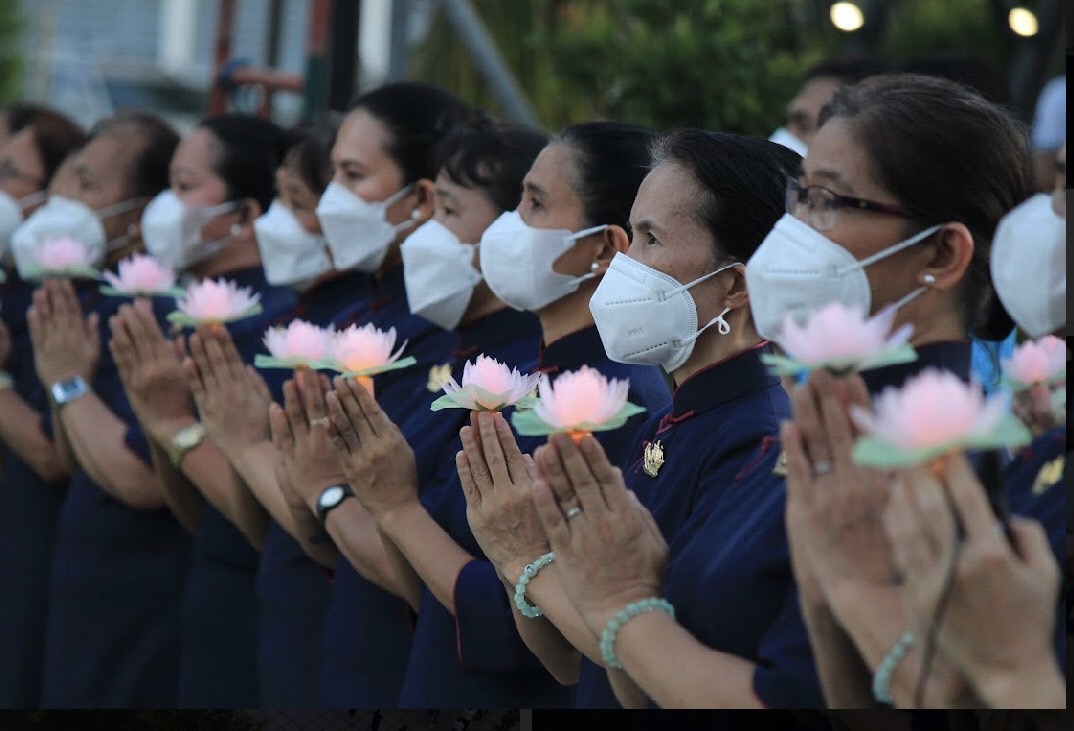