The British Broadcasting Corporation (BBC) named the Tzu Chi founder Dharma Master Cheng Yen as one of the 100 inspiring and influential women from around the world for 2022.

In the list released on December 6, the BBC cited Dharma Master Cheng Yen’s contribution in the development of modern Taiwanese Buddhism and Tzu Chi’s humanitarian efforts worldwide, including providing aid to refugees from war-torn Ukraine.

Since then, the foundation has grown to be one of the most renowned organizations in the Philippines with impact reaching all corners of the Philippine archipelago for the past 28 years.

In 2009, on the heels of typhoon Ketsana, locally known as Ondoy, Tzu Chu launched its first large-scale cleanup effort with a cash-for-work program, where survivors and residents were recruited for cleanup operations receiving 400 pesos a day.

When Super Typhoon Yolanda (international name: Haiyan) struck the Philippines on November 8, 2013, an army of Tzu Chi volunteers from around the world traveled to Leyte to deliver aid and relief. With global fundraising efforts, Tzu Chi contributed 3.2 billion pesos for Yolanda disaster relief.

When the COVID-19 pandemic forced lockdowns in March 2020, Tzu Chi donated PPEs, face masks, face shields and other medical supplies and equipment to government and private hospitals all over the Philippines. Throughout the pandemic, Tzu Chi donated more than a million kilos of rice and other household needs to thousands of displaced workers such as jeepney and tricycle drivers, as well as scavengers and PWDs.

In the field of education, the foundation has provided more than 13,000 scholarships since 1995. Today, Tzu Chi has more than a thousand scholars from Metro Manila, Pampanga, Bicol, Cebu, Bohol, Iloilo, Leyte, and Zamboanga.

In 2021, it gained the highest level of accreditation by the Department of Social Welfare and Development (DSWD) for satisfactorily complying with Third Level standards in the implementation of community-based programs and services.

Master Cheng Yen has also been nominated for the Nobel Peace Prize in 1993, and honored on TIME 100: Most Influential People in the World list in 2011. 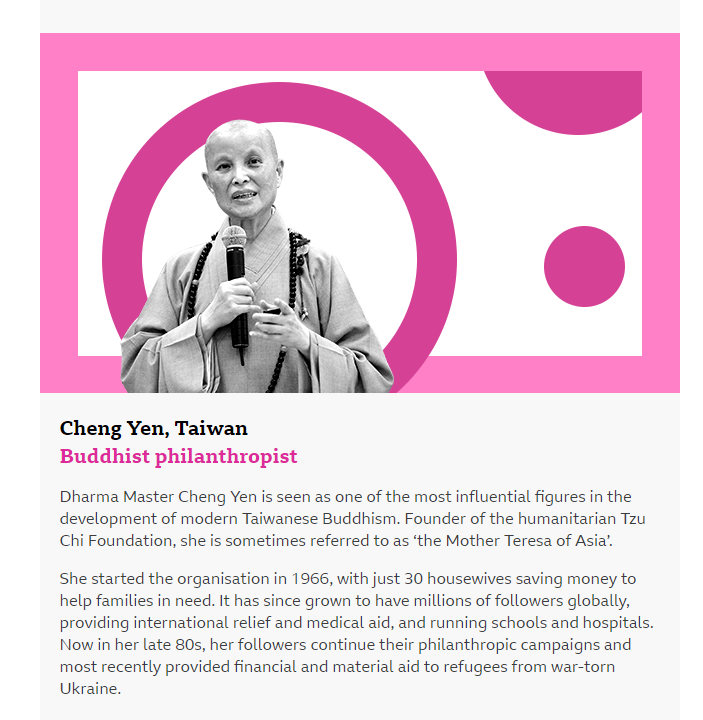