It was a day of fellowship, thanksgiving, and blessings when 86 medical assistance beneficiaries dropped by the Buddhist Tzu Chi Campus in Sta. Mesa, Manila, on December 18 for the last Quarterly Charity Day of the year. Aside from the two sacks of 10 kg rice, bag of assorted groceries, and medications for their specific cases, beneficiaries and their families received gifts from volunteers in keeping with the holiday spirit. They also snacked on mushroom burgers courtesy of Kabutihan Farm, a restaurant and events place in Amadeo, Cavite, that cultivates oyster mushrooms, the chief ingredient of their meat-free patties and chips.

“We’re very happy because at the end of 2022, we were able to help so many people,” says Julie Collado, one of the social workers at Tzu Chi Foundation Charity Department. “As you know, we’re still in a pandemic. But Tzu Chi never stops helping, especially for those in need.”

Before she became a beneficiary in November, Beth Dela Cruz had already witnessed Tzu Chi’s benevolence. “My first impression of the volunteers is that they’re simple and peaceful,” says Beth, 50. “They would go from house to house every week to collect paper, cardboard, and plastic from us for their recycling program. Then when floods from Super Typhoon Ulysses damaged our homes, my family and I received cash assistance from them.”

Compassion and relief were also extended to her and her brother during their respective health crises. After undergoing a mastectomy of her left breast in March 2018, followed by six cycles of chemotherapy, the stage 2a breast cancer survivor now takes oral chemotherapy medications supplied to her by Tzu Chi. Meanwhile, her brother received three months’ worth of medicine for his necrotizing fasciitis or flesh-eating bacteria. Unable to walk just months before, he is now ambulatory, handles simple chores at home, and even returned to work.

To reciprocate Tzu Chi’s boundless generosity, Beth shared her breast cancer journey during a short program at the Jing Si Auditorium. She also left volunteers with copies of her book, “Thank You, Thank You, Lord!” a compilation of her personal reflections as a cancer patient.

Moved to tears at the thought of people looking after her in her darkest hours, she says, “To Tzu Chi, my heart is in deep gratitude. I didn’t expect it but I’m lucky that I qualified to receive your help and become a beneficiary. Thank you, thank you, Tzu Chi.”

Unless Richard Lumbera raises his shirt to reveal a scar running down the center of his chest, there’s no way you could tell that the 45-year-old salesman underwent mitral and aortic valve replacements via open-heart surgery at the Philippine Heart Center last August 27. Diagnosed with a heart condition in his teens, he lived symptom-free for many years, until recently, when his lips turned purple and simple tasks like brushing his teeth left him breathless.

Though his employers, Richard learned about the Tzu Chi Foundation and approached volunteers for help and with no expectations. “I didn’t push it,” he says, “but to my bosses’ and my surprise, I received a guarantee letter that I used to fund my surgery.” In a matter of months, Richard went from catching his breath whenever he spoke to being able to jog continuously and comfortably.

For Richard, Tzu Chi didn’t just save his life; it changed it, too. Through lessons imparted by volunteers every Charity Day, he’s given up his old ways and is learning to imbibe the good values espoused by Dharma Master Cheng Yen. His latest goal: to eat more vegetables.

“Every year, it’s during Christmas that pigs and chickens are so pitiful. They are slaughtered for food and we eat them,” he says. “We should be vegetarian, especially this Christmas season. Let’s give love to animals.” 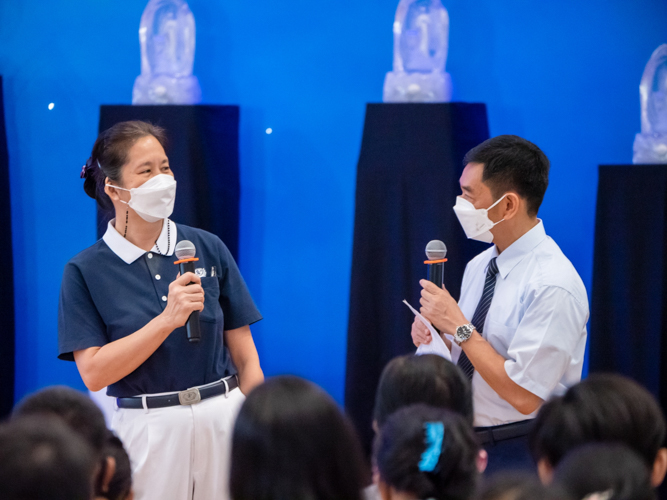 Volunteer Ligaya Ng explains the lessons behind Master’s Talk, “The Learned Man and the Kitchen God.” 【Photo by Daniel Lazar】 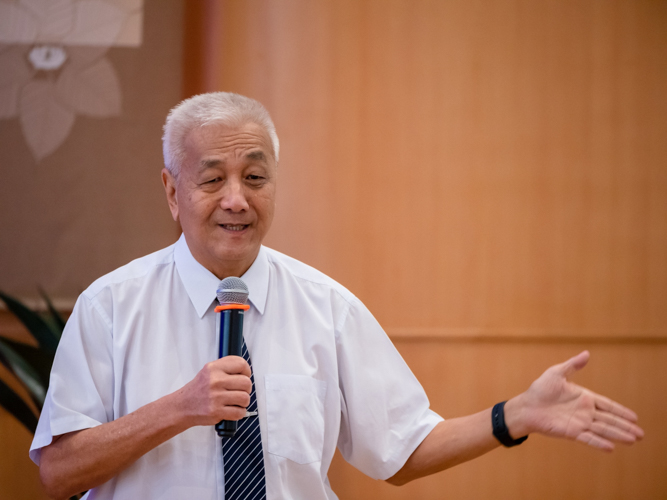 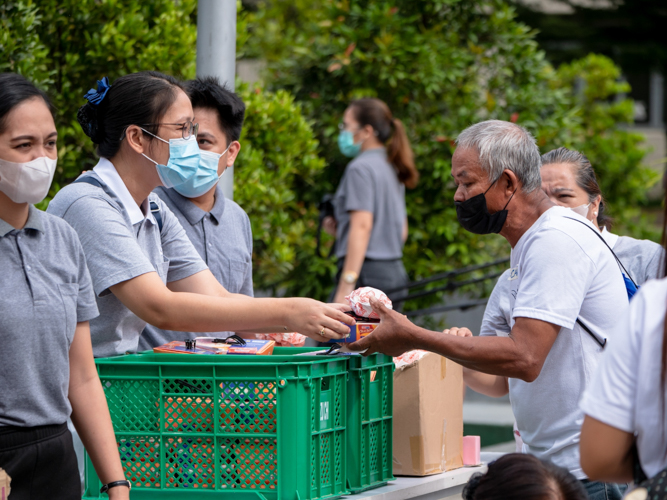 A volunteer hands a beneficiary snacks that include a mushroom burger from Kabutihan Farm. 【Photo by Daniel Lazar】 A young boy picks up a gift and bag of medicines. 【Photo by Daniel Lazar】 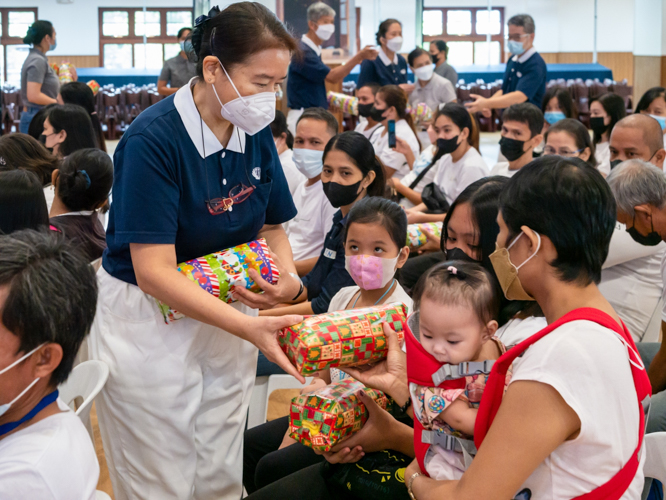 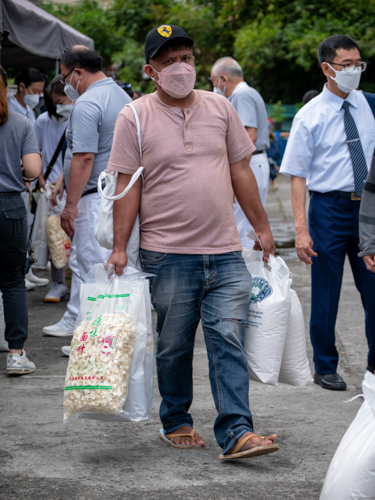 In addition to the two sacks of 10 kg rice, bag of groceries, and medical assistance, beneficiaries took home a bag of noodles. 【Photo by Daniel Lazar】 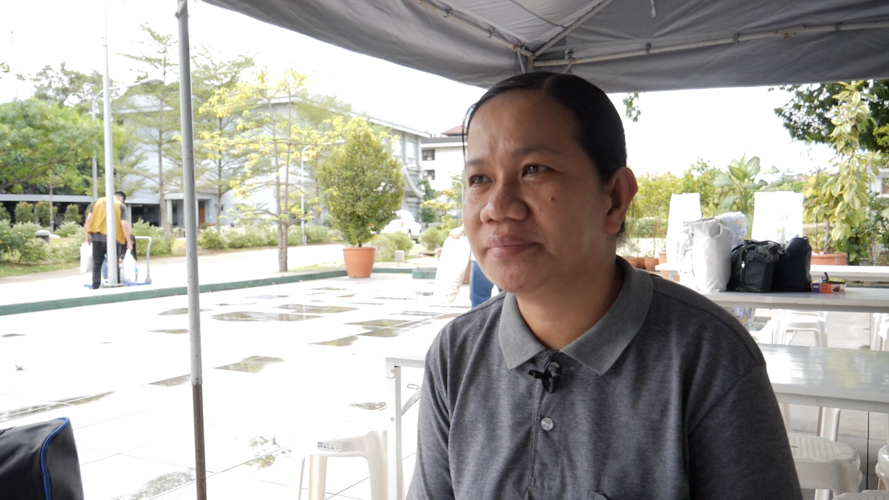 Successful mitral and aortic replacements via open-heart surgery have given Richard Lumbera a new lease on life. 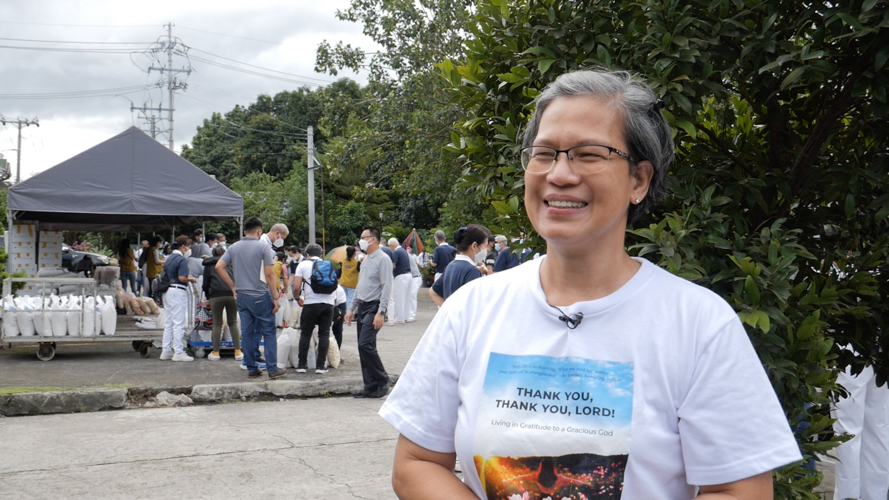 Stage 2a breast cancer survivor Beth Dela Cruz is grateful to Tzu Chi for providing her with oral chemo medicine.
Go Back