As one of hundreds of jeepney drivers from Caloocan to receive generous rice and relief goods in three tranches from Tzu Chi Foundation last year, Michael Celeste did something unexpected with his share. He divided his rice into 1-kilo packs, loaded them into his jeep, drove around his route, and gave the packs away to people who needed help.

That says a lot about a man who, by his own admission, “had nothing” when the pandemic struck. With no passengers to ferry in strict quarantine measures, Celeste and his fellow drivers relied on aid from government and foundations like Tzu Chi.

Yet here he was, giving his aid to Caloocan’s poor families.

“You will really take pity on them because many have children,” says Celeste, who shared his story during Tzu Chi’s third distribution for 2,331 tricycle drivers last December 5 at the Caloocan Sports Complex. “Tzu Chi gave us so much that I didn’t think I would be able to finish what I have. So I gave each family 1kilo of rice. You could tell from their faces that they were very happy. It was a small thing for me, but to them it was a big help.”

For this jeepney driver, sharing his blessings comes naturally. “Even if I have a little, I would share what I have with my neighbors,” he says. “Maybe I have the heart to help and give.”

Attending Tzu Chi events also immersed him in an atmosphere of giving. In every Tzu Chi event, volunteers spend the day handing beneficiaries two sacks of 10-kg rice and bags of assorted grocery items. Beneficiaries like Celeste also experience the joy of giving when they turn over the money they saved in their Tzu Chi coin banks to a collection that will support other beneficiaries.

“It feels good when you help you fellowmen,” he says. “Especially after they receive what you give them and say ‘Thank you.’ It feels good to hear.”

Tricycle driver and CAAD TODA officer Christopher Bengco has likewise lived a life of giving and sharing. A tricycle driver for over 20 years, he took on the responsibility of supporting his niece when she was a little girl.

“Her father was my cousin. When he died, I promised her that I would support her and wouldn’t have a family of my own until she graduated from grade 6,” he says.

Bencgo kept his word. Today, his niece is a teacher and he is a father of three young kids.

The tricycle driver credits his generous spirit to his father, a puto (rice cake) vendor. “When he was still alive, my father used to say, ‘Son, we are like moss. Moss is just there, but when a strong wave comes, it is carried away. That moss leaves a mark where it once was. Even in small ways, leave your mark.’ That’s what I saw from him when I was growing up. When he sold puto, he would also share.”

Bencgo leaves his mark by being helpful whenever he can. To his neighbors, he distributes extra cans of sardines he claimed from Caloocan’s relief operations. To his fellow tricycle drivers, he uses his time and efforts to ensure they bring home food and financial aid to their families.

“Because of the rice and relief goods we received from Tzu Chi Foundation, our troubles are eased,” he says. “My thanks are not enough for the three tranches you gave us tricycle drivers. May Tzu Chi Foundation be blessed and continue to help others during the pandemic.” 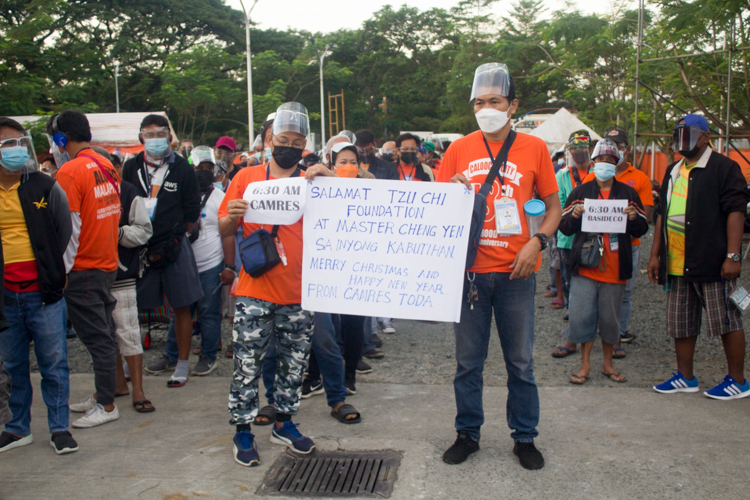 Tricycle drivers from CAMRES TODA show their thanks for Tzu Chi Foundation’s help with a sign. 【Photo by Matt Serrano】 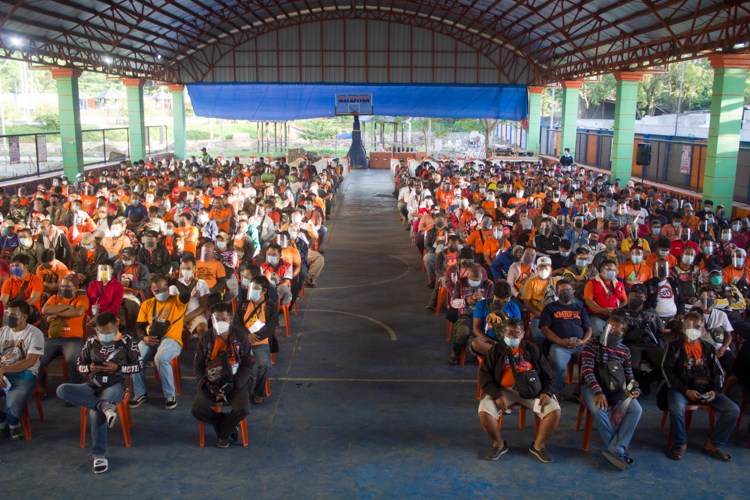 2,331 Caloocan North tricycle drivers were on hand to claim their third and final tranche of rice and relief goods. 【Photo by Matt Serrano】 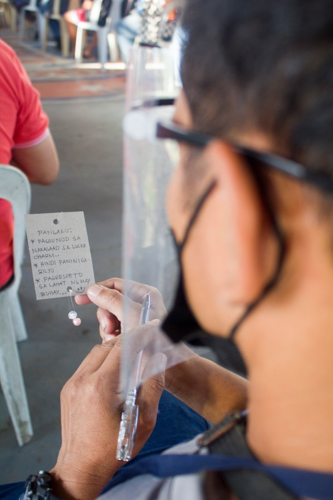 Quitting smoking and respecting all living creatures are among the New Year’s resolutions of this tricycle driver. 【Photo by Matt Serrano】 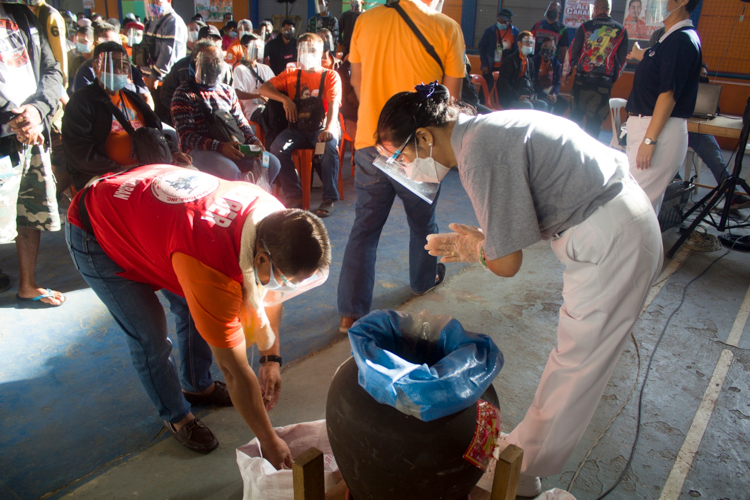 A tricycle driver places his pledge in a collection that will help Tzu Chi beneficiaries like him. 【Photo by Matt Serrano】 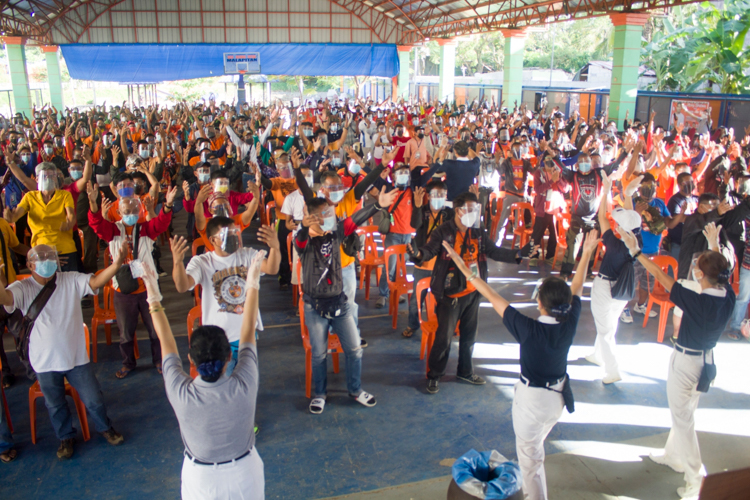 Volunteers demonstrate the actions of a Tzu Chi song before tricycle drivers. 【Photo by Matt Serrano】 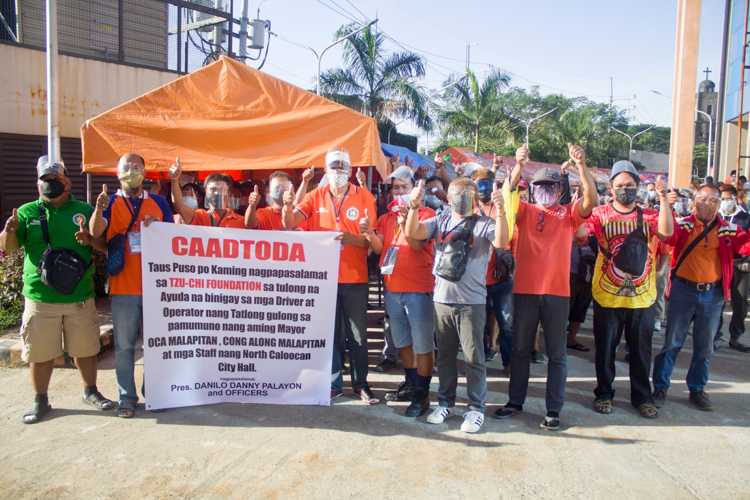 Members of the tricycle group CAAD TODA give Tzu Chi their two thumbs up. 【Photo by Matt Serrano】 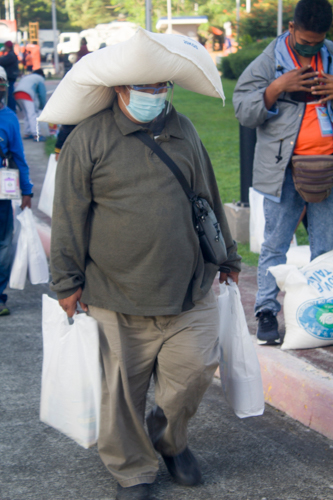 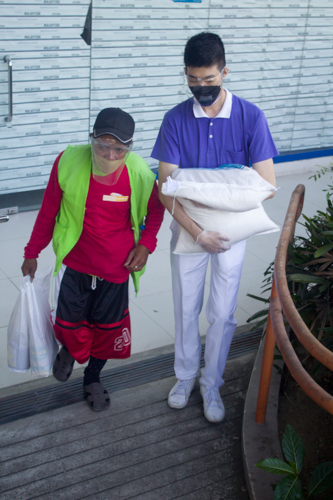 A Tzu Chi Youth volunteer assists a tricycle driver with his sack of rice. 【Photo by Matt Serrano】 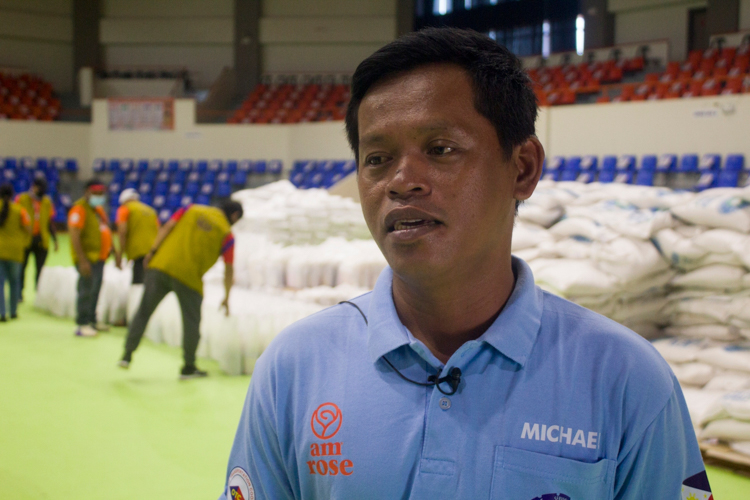 With more than enough to tide him over, jeepney driver Michael Celeste packed 1kilo bags of rice from Tzu Chi and distributed them to neighbors in need. 【Photo by Matt Serrano】 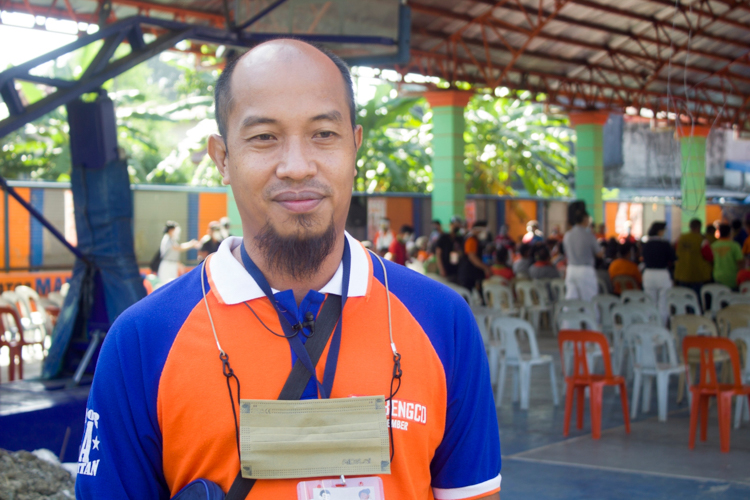 CAAD TODA officer Christopher Bengco uses his time, effort, and share of relief goods to ensure his fellow drivers have food and aid for their families. 【Photo by Matt Serrano】
Go Back